Last week I had the opportunity to continue my interest in game based learning by observing a year 4 class at another international school. The students were engaged and motivated by using Minecraft to share their understandings of Ancient China. I immediately thought how Minecraft has application for our year 3 when they undertake their Ancient Civilization inquiry. It was great to observe and be reminded of different teaching strategies. I always believe, watching another teacher “teach” is one of the most powerful professional development opportunities there is.

At the beginning of the hour long session, the teacher refocused the students on ‘where they were at’ in creating their Minecraft building by reflecting on the rubric criteria. She also reminded students to stick with their building plans, and made ‘real world’ connections, that this is what builders do in real life. The rubric was again referred to at the end of the session, with students considering what they had achieved (“turn and talk with your team“) and where they needed to focus next week to finish. The students worked in small teams of three, and were at the stage where the scaffolding and research had already been done. In the early weeks of the unit, students were given the time to explore and engage with Minecraft to become familiar with the game. This was followed by in-depth research of their topics, before they began ‘building’.

Once students were at the computer, the collaborative conversations began as teams worked together. A comment made by the teacher was the power of Minecraft or digital games to introduce myriad digital citizenship concepts within the game play. Further, the games allowed for the “teachable moment” as was observed during this particular session when one team of students used inappropriate comments and showed off task behaviour while ‘chatting’. The teacher was able to stop all play, and have students gather on the mat to explore the text, (“I want you to read and reflect on this chat. I want your opinion. Any comments?“) and bring the conversation back to the rules of online social language and behaviour. Students were very quick to pick up on the inappropriate words or comments. 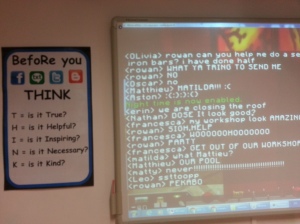 Music played in the background, which the teacher also used as a strategy for noise control. Another idea that the teacher would have liked to include within this unit, was to allow students use lego blocks to visualise the spatial components of their buildings before playing the online Minecraft game.

It was interesting to discuss the different staffing and technology arrangements. While ICT is integrated into the classroom with teachers taking responsibility for the ‘communication’ aspect of technological use, there are three IT support teachers who focus on technology and connect it to the curriculum. Minecraft is only one tool that is integrated within the curriculum. X Box and focus on coding using Raspberry Pi and other programs such as Hour of Code and Scratch are also used.

The school uses after school CCA clubs to trial different technology tools and programs on a small scale before introducing them into the classroom. Students were also trained as Tech Leaders from each class. These students apart from providing additional support within the classroom, also ran a playtime world during the lunch time as a recreational game. The school is also experimenting with a virtual reality kit. I experienced VR for the first time. Needless to say, it was quite a disorienting feeling to be standing next to a gorge or on a cliff top (especially, when I do not have a strong feel for heights!). I immediately saw the benefits of VR to use as provocations or to use throughout a unit of study or research. It makes me wonder whether teachers are utilising the huge number of resources available such as the online tours of museums around the globe such as the Smithsonian Institute.

I returned to my own school, invigorated and excited about how games can be used for education.

Have a dose of what life is really like living here – from my single-handed destruction of the Turkish language, random arguments with random relatives about everything from apples to vaginas to learning the secrets to making the perfect içli köfte! Highs or lows this is my observations from the melting pot of crazy that is my life in Mersin.

Research and musings of a Teacher Librarian

A network for connecting 21st Century Educators around the world

A blog about learning

Musings of a Teacher Librarian

A daily selection of the best content published on WordPress, collected for you by humans who love to read.

The Art and Craft of Blogging

The latest news on WordPress.com and the WordPress community.